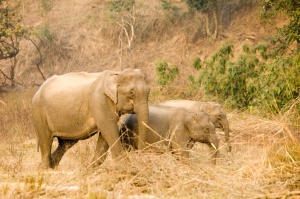 I saw the Asiatic elephant in Rajaji National Park in January.

The year of 2013 was particularly eventful. Here is the story of some of the expeditions that I undertook and some of the work that I did in the past year.

On New Years Day 2013 I woke up in Sasan Gir near Gir National Park in India and had a morning tour seeing crocodiles and a lot of birds. I had, just the day before, spotted five Asiatic lionesses in the same national park. The expedition in India continued to the former Portuguese colony of Diu and then on to Rishikesh, Rajaji National Park and New Delhi after which it was time to get on an airplane to head back home – but there was one more stop along the way.

Qatar is the richest country in the world.

Qatar – the richest country in the world when measured as gross domestic product per capita – was the last step in the five and a half week expedition to Asia. I spent roughly twelve hours strolling the streets, mosques and skyscrapers of a nation built mostly on oil money.

I started working for the Swedish Carnivore Association as the regional coordinator from February. I work with supporting the organization’s regional forces in trying to save the large carnivores in Sweden. In my job I helped out to build a carnivore-proof enclosure for sheep, organized a lecture with a prominent ethologist where I also acted host of the event, organized many meetings, participated in events, writing newsletters and much more.

The European Parliament in Strasbourg in France.

Many years prior, I did learn how to use ice skates and 2013 was the year when I re-learned how to use them. I also developed my skills with the snowboard and started training Brazilian jiu-jitsu a little bit again after a long hiatus.

In April I traveled to Finland to explore its capital, Helsinki, for a day. Although it was rather cold the trip was a very nice experience.

Starting out with field work in early May, I scanned the forests for trees that have been eaten by moose for Svensk Naturförvaltning AB. This job took me through the counties of Värmland, Örebro, Södermanland, Stockholm and Dalarna.

I visited the Swedish Riksdag to learn more about the political game.

I traveled to Germany and France at the end of August and early September visiting the cities of Freiburg, Strasbourg and Berlin. Freiburg is known for its environmental initiatives while Strasbourg is home to the European Parliament and in Berlin I saw one of the strongest men in the world – a vegan; Patrik Baboumian – score a world record lifting and walking ten meters with a yoke weighing 555 kg.

A tradition in the fall is censusing otters and in September I set out with a team looking for tracks of the acrobatic aquatic animal. I was interviewed by both Värmlands folkblad and Nya Wermlandstidningen regarding the census. We found quite a lot of scats which is a good sign of that the otter is slowly but surely returning.

The International Snow Leopard Conservation Forum in Kyrgyzstan marked what could be a new era in snow leopard conservation.

Together with a class from my old school I visited the Swedish Riksdag (parliament) to learn more about how the political processes work.

Late in October I traveled to Kyrgyzstan to participate in the International Snow Leopard Conservation Forum. The forum was hosted by the president of Kyrgyzstan, Almazbek Atambayev. I also hiked up in Ala Archa National Park for one day and explored the capital of Bishkek. On the way back from Kyrgyzstan I had a full day in Istanbul in Turkey, exploring large parts of the city.

I have held five talks on carnivore conservation in 2013, in Uddevalla, Kristinehamn, Borås, Höör and Stöllet. 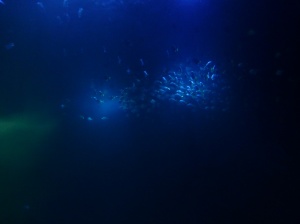 Fishes at Universeum in Gothenburg by the end of the year.

For the carnivore magazine Våra Rovdjur I wrote an article about the Asiatic lion after my meeting with the species in Gir National Park and also an article on the Iberian wolf based on an interview with researcher José Lopez and the snow leopard conservation forum that I participated in along with an interview of Brad Rutherford, director of Snow Leopard Trust.

Late in December I visited Universeum in Gothenburg and had a very nice and calm New Year’s Eve with fire and a clear night sky in the countryside of Skåne.