The cliffs around Smögen are beautifully flat. For many hours a grand lightning storm entertained us shooting lightning strikes all across the sky.

I have just gotten back from a three day expedition to the west coast in Sweden. I managed to catch a glimpse of a seal late one night and I snorkeled in the Atlantic Ocean trying out under-water photography. The waters were full of jellyfish and in particular the lion’s mane jellyfish, which is known to be the biggest jellyfish in the world. They are poisonous and I was only a few decimeters away from the dangerous tentacles while taking this picture.

Some years back, a national park, Kosterhavet, was set up to protect the only coral reef in Sweden. The reef has been under heavy pressure from large fishing boats ravaging the bottoms and killing the corals. The reef is far beneath the surface and is thus difficult to visit.

Now I am back home for a few days focusing on the work for the Swedish Society for Carnivore Conservation and other projects.

The lion’s mane jellyfish is poisonous but seldom deadly. Its body can span two meters and some tentacles have been found to be 30 meters long. 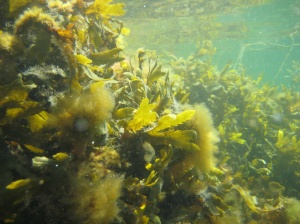 The area on the west coast of Sweden is rich in biodiversity. Seals, many species of birds, otters are frequently sighted here. Three weeks earlier a group of fisherment caught sight of ten orcas nearby here.

Last weekend I helped out building a carnivore-proof fence around the area of Tiveden National Park. This is much necessary as the wolf pack in the area have been sighted with five pups. Constructing carnivore-proof enclosures for domestic animals is one of the best ways of protecting carnivores and helping the people who might suffer economic losses and emotional headache from the presence of carnivores.

he big field season ended yesterday. It has been two and a half months of intensive traveling, working in the field, staying at many different places, going through the counties of Värmland, Örebro, Dalarna, Västmanland, Stockholm, Uppsala, Södermanland, Östergötland, Västra Götaland, Jönköping, Kronoberg, Kalmar, Blekinge, Skåne and Halland. The season was remarkably still as I mostly worked around Värmland and Stockholm.

Having two jobs and full-time studies at the same time proved to be a tricky equation. The season topped off yesterday as I came home from an awesome southern-Sweden expedition with visits to Växjö, Kalmar, Öland, Karlskrona, Malmö, Göteborg, Marstrand and, unvoluntarily, Säffle as my car held its last breath just as Karlstad was approaching. Now it is time to relax for a bit.