Claudia collects scats from puma one day in September.

For 21 days straight we have been trying to collar jaguars and pumas in Caatinga in eastern Brazil. Luck was not on our side this time. This has led to a change of plans in the expedition.

I am right now on my way out of Brazil after having spent more than five weeks here preparing for the capture campaign, taking pictures, preparing my study and – most importantly – we have been trying to collar jaguars and pumas here.

Together with team leader Claudia and the two experienced veterinarians Joares and Carlão, as well as Douglas, Neto and Ismael from Programa Amigos da Onça, we have been setting snares to collar the cats. 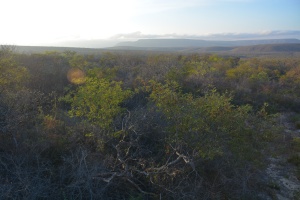 The area in which we work is vast and there are only very few roads and trails.

We worked in the vast area that is Boqueirão da Onça – a wild area of more than 8 000 km². The area is dry, thorny and dense. We have had temperatures of between 35-40 degrees Celsius for most days. Luckily the dry air makes the heat feel less intense.

In preparing the field campaign we had to bring nearly a ton of water out to the field camp, and food for seven people for a month. The capturing campaign has also been preceded by extensive work with camera traps especially over the past year by Claudia and her team, in order to see where the animals move. 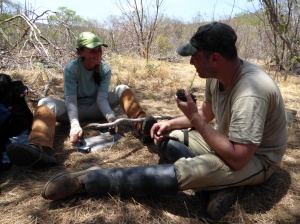 Claudia and Carlão mount a radio transmitter which lets us see from the camp when an animal has stepped in the snare.

Since the jaguar population in the area is sparse, you have to be a bit lucky even with all these preparations. We did see tracks of jaguar just a couple of days before we put out the first snares. Then after that – quiet.

Luckily, there will be another capturing campaign in November, followed by another one in the first half of next year. If everything goes according to plan, the team should be able to collar the first jaguars in Boqueirão da Onça leading us to greater knowledge and very important tools for conserving the animals in this environment.

The change in plans mean that I will return here to Brazil in the first half of 2017 to continue the work once the team has successfully collared at least one cat.

One evening Joares mimics the sound of a jaguar, hoping to catch their attention.

Meanwhile, I have been very happy to see that the crowdfunding campaign has received full funding! I wish to thank everybody that has helped out and I am looking forward to making this important work happen in 2017! Thank you once again!

And also, thank you very much for this time, Brazil, and see you soon.