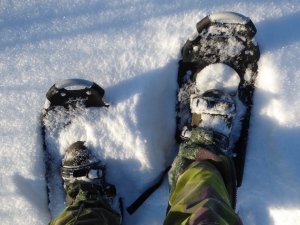 Out doing a snow track survey out by the coast in Uppsala county, using snow shoes.

2019 is well underway and there have been a lot of exciting things happening for me. I have spent some time out by the east coast in Sweden doing a snow-track survey, looking at tracks from carnivores and other wildlife, and also held three guided tours with large carnivores and had a trip up to the world heritage site Laponia in northern Sweden.

Starting in January we were out censusing wildlife out by the coast in eastern Sweden. We have pre-set lines that we hike in the field and where we note all tracks of mammals that cross the lines. We find a bit of this and that during these censuses, from roe deer and hares to martens, squirrels, moose and other animals. In one place an otter had pierced the ice and gone up across a frozen lake. Nearby were also tracks from the rarely seen Eurasian lynx. 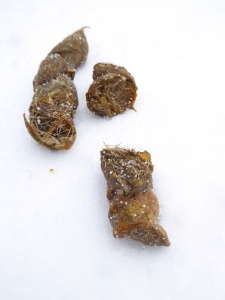 Scats from gray wolf in Glamsen wolf territory, the scats containing both hair and pieces of bone from its prey.

Something very rare happened once, as I in one instance scared off two wild boar that were resting in a dug-out anthill just five meters from where I was standing. They didn’t react to me at first but after about 20 seconds one of them turned its head and looked at me. It didn’t seem to understand that I could see it at first but once it did, they both rushed off in a great hurry. Wild boar is normally very wary and it is rare to come that close.

Doing this kind of field work is always refreshing and a welcome contrast to being inside by a computer working. I enjoy it a lot. 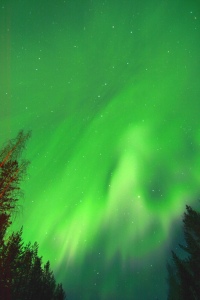 A majestic northern light dances all over our heads, in Norrbotten, Sweden.

The first two weekends in February I organized three guided tours together with Biotopia in Uppsala. We held one guided tour with Eurasian lynx, following tracks of a lone individual in the wild and talking about everything about the lynx, from how it lives to its situation in Sweden. We also held two guided tours with gray wolf, following a wolf pack in northern Uppsala county. In one instance, we found 17 wolf scats within a few hundred meters along with several resting sites.

Then I have just spent two weeks in the world heritage site Laponia in north-western Sweden. Laponia is located north of the Arctic circle just at the foot of some of our highest alpine mountains. Stora Sjöfallet National Park, where I stayed, was established in 1909 along with several of the other large national parks in Sweden, including the legendary Sarek National Park. 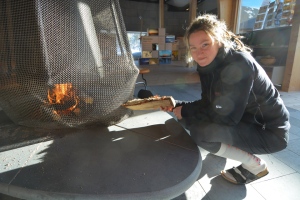 These were some of the first national parks established in the world. Sadly, they together cover only about 9 400 square kilometers of mostly non- or low-productive land, comprising roughly 2 % of Sweden. This shows what a small amount of Sweden that is actually protected. The rest of the country has an intensive forest production where about 90-95 % of trees are cut down before the age of 100 years, with only a patchwork of small nature reserves decicated to protect the endangered species relying on old-growth forest. 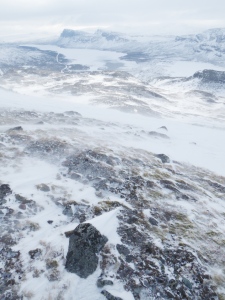 An amazing view amidst strong winds near the top of Mt. Nieras inside Stora Sjöfallet National Park.

With that in mind, though, Laponia and its national parks is the last area of largely untouched land in Sweden, and it is quite amazing seeing the vast alpine mountains and fairly large stretches of land that is protected in this area.

For my own part now, field work is finished for the time being and I am back in Uppsala working with new – and ongoing – projects.