Showing tracks from roe deer during a guided tour in September 2019.

It’s been a long time since the last update. So what has been going on? Well, both a lot and no so much.

For one thing: It is winter, yet not really winter – both at the same time. I have worked with censusing large carnivores in Uppsala county since November. But with barely no snow, it has definitely been more of a challenge than usual. A large part of the field work is about trying to find scats of wolf. These scats are analyzed for their DNA to figure out which individual it is. And then we have to rely more on camera traps, especially for lynx. While there was snow, I did have the chance to follow one family group of lynx in western Uppsala county. It is always refreshing trying to follow these tracks as they like to go up logs and boulders. I’m glad I’ve practiced climbing.

Following the tracks from a family group of lynx in western Uppsala county in December 2019.

I also organized two guided tours during the fall, for Biotopia’s Äventyrsgruppen. In one, we spotted for beavers in Fyrisån, and in the other we scouted for red deer and other wildlife.

Besides field work, I try to find time for other projects. Let’s see if something comes to fruition in the future, in which case it will be announced. 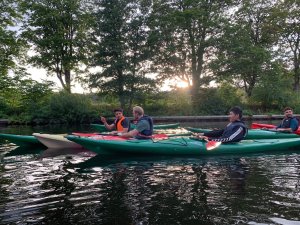 Spotting for beavers in Fyrisån.

Scats from a genetically important wolf in northern Uppsala county, found in January.