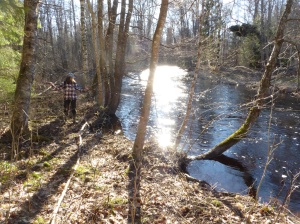 Working with wildlife surveys takes you to a lot of places you would normally not go.

Spring has both come and gone, and Sweden has now entered summer. I have done field work in the past two months and also held some public talks, while working on future projects.

In April we worked with doing a scat census of wildlife out by the coast in Uppsala county. In this census, we have set stations where we look for scats from moose, roe deer, wild boar, hare and other animals. With moose, it’s possible calculating roughly how many live in an area since we know how many times per day they defecate. And since we determine the age of the scats and have a set area which we investigate, we can count backwards and get a number.

In May, I worked for a couple of weeks investigating how much wildlife forage on young trees. This year I worked in northern Uppsala county and southern Västmanland county.

In between field work, I organized two rhetoric courses with animal ethics theme in Uppsala, one in April and the other in May. The participants learned how to build an argumentation and did a quick public talk. The second one focused more on debates and conflict management and also included the topics of psychology and conflict management. The participants got to do role-playing games taking on various roles in discussions. I also held a talk for Friluftsfrämjandet at Biotopia on 8 May, talking about my work with wild cats. 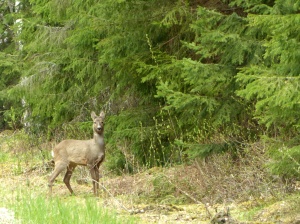 A curious roe deer (Capreolus capreolus) from when out looking at wildlife foraging on trees, in Västmanland in May.

During a trip westwards in Sweden in mid May, I visited a national park that I had not, until then, and for strange reasons, never visited before: Garphyttan National Park. I have crossed the entrance road to this national park hundreds of times over the years, without ever taking the turn. This time, I took the time to cross the park, which is quite small at only 1.1 square kilometers. The national park was one of the original nine formed in 1909. While small, the park is a nice area to stroll through and is part open meadow kept open by haymaking. I can recommend a visit.

Field work is now over for the time being and I will be working with other things. To be continued.