Myself and Vania on a hill in Rio de Janeiro.The city is spectacular. In the background is Ipanema beach, which is around the corner to Copacobana.

Brazil! A huge country, with variation to match, both in terms of people, culture and, of course, nature. Most people associate Brazil with rain forest, football and Rio de Janeiro, but let me tell you: There is much more to it. For the past month, I have traveled Brazil to learn more about the elusive jaguar (Panthera onca).

Arriving in what many consider the pearl of Brazil, Rio de Janeiro, I am shown around by Vania – a specialist in otters and a native of Rio. The city is most famous for its Copacabana beach, Jesus the Redeemer statue and Carnival. We explore the city, climb a hill at one of the favelas, visit a tranquil island in the bay of Rio and also attend the first ever vegan festival in Niterói. The landscape around Rio is spectacular making it one of the most beautiful cities in the world. 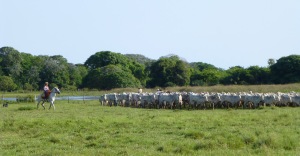 Maria working with the cowboys moving cattle at Xarae’s ranch, during the jaguar-cattle study.

After exploring Rio for four days I travel to Campo Grande in the state of Mato Grosso de Sul. I soon make my way to Miranda which is on the southern border to the Pantanal – the world’s largest wetland. There I meet with Maria who is doing a master study on the cattle-jaguar conflict, and her Brazilian friend Luciana. Together we go to Xarae’s fazenda where I spend three days seeing the project.

While Xarae’s is mainly a cattle farm, it is also a place where tourists come to see wildlife. Many fazendas have started to develop tourism as a second source income, and the Pantanal happens to be the best place in Brazil to view wildlife. This wildlife and eco-tourism is a great way to preserve nature and wildlife, that might otherwise be removed in favor of cattle. 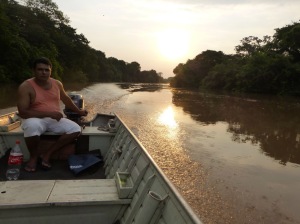 Edimison takes me out on Rio Miranda for two hours around sunset.

After Xaraes, I spend a few days in the nice little city of Miranda. One night I ask a man called Edimison, who lives just by Rio Miranda, if I can rent a boat from him. He takes me out on the river for a couple of hours around sunset. I also go out the next day for an hour. You see a lot of birds on these rivers and it is well worth it.

Meanwhile, Maria tells me that she found a dead jaguar by the road north of Buraco das Piranhas. It was most likely poisoned and had died that morning. This happens since jaguars sometimes kill livestock like cattle – especially calves – and farmers sometimes retaliate by poisoning the carcasses.

The next day I travel to Campo Grande to meet with Rafael Hoogesteijn. He is a specialist on jaguars and especially the conflict between cattle ranchers and jaguars. Rafael knows this situation very well as he has worked with cattle farms for many years and also with jaguars. We speak a lot about the situation of the jaguar and what can be done to ease the conflict. 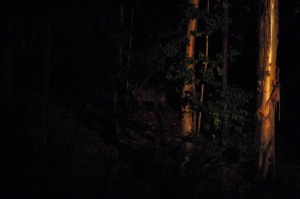 A puma prowls the edge of the forest.

Fazenda San Fransisco is one of the biggest tourist pousadas in the southern Pantanal. Many tourists take the opportunity to go there since it is easy to get to after a visit to Bonito (one of the natural pearls of Brazil). On a one day excursion to San Fransisco I see both ocelot (Leopardus pardalis) and puma (Puma concolor) in the same night. Especially puma is difficult to see here so it is a great observation. I also see giant anteater, march deer and, of course, a lot of caimans.

From the fazenda I get back to Miranda and grab a bus to Campo Grande. I then take an eleven hour bus up north to the city of Cuiabá, which is on the northern edge of the Pantanal in the state of Mato Grosso (not to be confused with Mato Grosso do Sul).

There I take a bus down to the much smaller city of Poconé. I spend a few days in Poconé seeing the city. The next morning I head back up to Cuiabá for the next stop on my itinerary.

Claudia speaks with a local who is worried about illegal logging of trees, just outside of Boqueirão da Onça.

Caatinga in the north-eastern parts of the country is the driest biome in Brazil, and one of the poorest. While there are jaguars in the area, the populations are fragmented and quite small, due to the extensive hunting of the 20th century.

I arrive in Petrolina in the middle of the night and on the next day meet up with Claudia Campos from the organization Pro Carnivoros. Claudia has worked in the area on and off for nearly ten years, focusing on jaguar and puma. She is working to establish a national park called Boqueirão da Onça to protect one of the last remaining jaguar populations in an area that is rich in variation and comparably untouched by man. Boqueirão da Onça, which is a mountainous area of more than 8 000 square kilometers, has no cell phone reception, and many of the small settlements only got electricity two months ago.

We purchase the food we needed for the week and head out in the morning. The drive to the edge of the area takes about two hours from Petrolina. We meet up with our field guide, Neto, who lives just outside of the proposed national park. Neto knows the area inside out. His wife prepares lunch for us and then we pack up all things into the pickup truck and go west – straight into the proposed national park.

This is one of the carnivore-proof night pens that Claudia’s team has helped to build.

We travel on bumpy and rocky dirt roads where a normal car would not get through. We spend the next five days visiting people, seeing the few areas where there is still water, seeing a place where a farmer experienced jaguar predation on his cattle, and also find pugmarks of both puma and ocelot, but no jaguar. We also visit a few of the jaguar-proof night pens that Claudia and her team has constructed together with the farmers. These pens are great for both farmers, who will get fewer losses, for the goats who will stay safer, and the jaguars, who will experience less risk of being poached or poisoned.

Boqueirão da Onça is a beautifully dry area with a lot of mountains and cliffs. Once the rains begin, usually no later than January, the area goes from whitish grey into a bloom. Still, even in the dry season, a lot of plants persist and there are also valleys which are green year around. Seeing the area was a good experience and the people there are among the friendliest that I have ever met.

Back in Petrolina I then fly to Sao Paulo where I take a 27 hour bus back up to Cuiabá. About 16 hours in, a man sitting in the seat in front of me is arrested by the police for smuggling drugs, which he hid inside the seats while the other passengers were out having lunch.

In Cuiabá I meet with my snow leopard book colleague Jan Fleischmann, who has just spent a bit of time in Porto Jofre seeing jaguars. We take a bus down to Poconé and from there hire a taxi to take us to Porto Jofre. At the entrance we are met by Roger at Hotel Pantanal North, where we will stay for a few days. Porto Jofre is possibly the best place in the world to spot for jaguars, especially around September and October. We spend four days criss-crossing the various rivers and tributaries on boat, searching.

Once the sun has set this jaguar male goes into the forest and we head back home for the night.

The jaguar is a beautifully spotted cat – the largest in the Americas. At the first look one usually think it resembles a leopard. Its life history, though, is more similar to that of the tiger.

On the side of the river, a female jaguar is with her cub. It is 33 degrees Celsius and sunny, and the two jaguars slowly walk alongside the edge of the river, sometimes stopping to clean each other. The female shows affectionate maternal love toward its cub. In seeing this, I am thinking that it must be difficult to hate or dislike these cats. They are truly awe-inspiring.

In the end, we observed no less than seven jaguars in these four days. I am thrilled to have seen this beautiful carnivore in the wild – a place where I hope that it will be allowed to continue to live. This also marks the end of the first part of my trip to South America, which continues in a few hours to another country, where part two begins.

I wish to thank all the kind and warm people that I have met during this month.