Freiburg is full of solar panels, including large scale constructions on some buildings.

I came back home yesterday after an interesting trip to Germany. I visited Freiburg to see what makes the city green. A lot of solar power throughout the city as well as great greenery – even some bridges were covered in green – were things that impressed me. Trams for transportation, and some parts entirely free of cars were others.

Taking a one-day trip to Strasbourg in France I had a look at the European Union Parliament where the plenary sessions are held once a month. A lot of important decisions are taken within these walls. Last up to join the European Union is Croatia, which joined in July 2013.

The European Parliament in Strasbourg.

After Freiburg and Strasbourg I visited Berlin and I saw the vegan athlete Patrik Baboumian score another Guinness world record lifting and walking ten meters with 555 kilograms on his shoulders. Some people claim that you do not get sufficient protein from a vegan diet, something that Patrik, being Germany’s strongest man, would possibly dismiss. 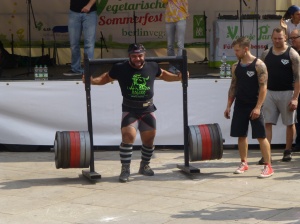 The vegan Patrik Baboumian lifts and walks ten meters with 555 kg on his shoulders beating the previous world record.