Approaching the Andes from Brazil.

Through the window of the airplane I see hills approaching as I fly westwards. The hills soon turn into mountains and at one point I think that I am seeing whitish clouds far off in the distance. They are at the same altitude as the airplane I am traveling in. As we approach them further it turns out that they are not clouds. It is the snow-clad peaks of the Andes!

Chile, on the South American west coast, is perhaps the slimmest country in the world. In most places it is only 100 or 200 kilometers from one end to another, east-west. A large part of the country is also made up of the Andes.

I arrive in Santiago on 9 November for part two of the South America expedition. While part one was dedicated to search for and learn about jaguars, part two will be dedicated to Chile and mountains.

A cetacean expert in the making, Sandra specializes on these large mammals in the oceans.

The day after, I am kindly shown around the Museum of Natural History in Santiago. The museum has several colocolos (Leopardus colocolo) and kodkods (Leopardus guigna) – two species of cat native to Chile. The kodkod, which is also known as güiña, is the smallest cat of the Americas. The museum also has puma (Puma concolor).

The visit to Santiago is brief as I on 11 November fly to Punta Arenas in southernmost Chile. I fly together with Sandra, who will start working with whales there in a few days. To give you an idea of how far south Punta Arenas is, bear in mind that the city of is located at 54 degrees South. Mainland Antarctica starts at 64 degrees South. Punta Arenas is one of the southernmost cities in the world (in South America only the Argentinian city of Ushuaia is further south). 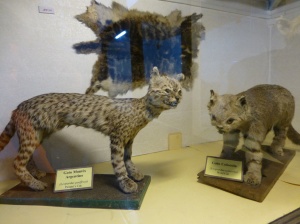 A Geoffroy’s cat (Leopardus geoffroyi) and a colocolo (Leopardus colocolo) at a museum in Punta Arenas. The art of stuffing animals has progressed slightly over the past century (also please notice the faulty names on the signs).

The climate in Punta Arenas is rainy, windy and chilly, even though it is approaching summer. It is around 8-11 degrees Celsius in daytime and the temperature drops to 0-3 at night. The weather also shifts quickly. People I meet say that it is colder than usual due to a strong El Niño phenomenon this year. The climate reminds me of Sweden in many ways which is a nice contrast to the high temperatures that I experienced in Brazil.

We spend the next few days exploring the city of Punta Arenas. The people living in the city are very friendly and helpful. Hitchhiking is no problem, as usually no more than one or two cars pass by before you are offered a ride.

On 15 November we go to Parque Nacional de Magellanes which is a nature reserve just west of the city. The environment there is great and I am amazed to learn that there are pumas living inside the reserve. It is only 70 kilometers from the southern tip of mainland South America. The view from the reserve is outstanding as we see the whole city of Punta Arenas and the Strait of Magellan from there. Many famous explorers have sailed past this strait, including Charles Darwin and Ferdinand Magellan.

The house in which we are staying has been used as storage space for quite some time. After spending a few days cleaning it, it turns out to be a quite cozy place. It is situated just by the Strait of Magellan. 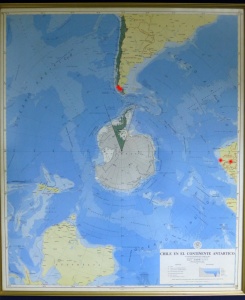 The red dots in Chile are Punta Arenas and Torres del Paine, while the places I have visited in South Africa are Kimberley and Port Elisabeth.

Visiting the Museo Naval y Martimo, which is essentially a naval war museum, reminds me that this is as far south that I have ever been in the world. Punta Arenas is only 1 350 kilometers from mainland Antarctica. As a child I used to dream of going to Antarctica. It is the last wilderness in the world. Antarctica is not an island, like one might think, but a continent of its own. It is nearly the same size as Russia. Imagine how vast this place is, and with almost not a single human. And it is not only ice and snow, but there are vast mountains underneath, which pierce through the lonely vistas in some places.

This search for true wilderness is something that comes from deep inside me, as we have colonized almost the entire world and changed its environments. I am sure that setting foot on this continent would spark a bit of hope, in that we can maybe not conquer everything.

But, oh well, seeing the last great wilderness will have to come another time for me.

This southern region of Chile is perhaps most famous for its Torres del Paine national park. Torres del Paine has been voted the 8th wonder of the world on a website after five million votes. Thinking that I would not want to miss this opportunity, I go to have a look one day.

The Towers of the Paine, along with lake Nordenskjöld, in Torres del Paine National Park.

Torres del Paine is spectacular. The landscape is really beautiful and there are both high peaks, rivers with waterfalls and glaciers in the park. It is a very picturesque area. I highly recommend seeing it by foot, hiking on one (or more) of its trails, as going on a tourist bus as I did sorely spoils the experience. In fact, I would go so far as to say that is like putting ketchup on an excellent truffle.

My days in Punta Arenas are winding up and I fly back to Santiago on 28 November, where I will spend the last few days of my expedition.

Together with my friends Patricia, Christian and their friend Filip, I climb the peak of La Carpa just east of Santiago, in the Andes. The weather is on our side and the whole day is sunny. The 2 700 meter peak has a great view and I can see the entire city of Santiago to the west, and many higher peaks in the Andes to the east.

I have one last day to relax in Santiago before embarking on a 33 hour journey home. The flight goes from Santiago to Saõ Paulo, onward to London and finally Stockholm. Seeing Stockholm from air is joyful. 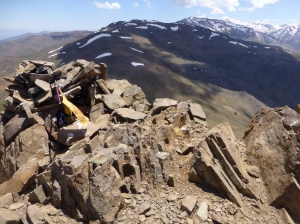 The peak of La Carpa after 3-4 hours of hiking.

This marks the end of Expedition South America 2015. It is time to finally come home and rest. But you never know what the future will bring…