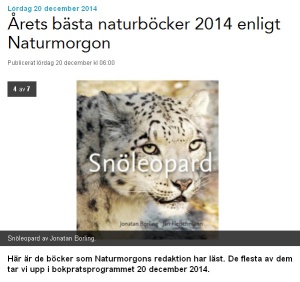 Sveriges Radio’s programme Naturmorgon has named the Swedish edition of the snow leopard book “One of the best nature books of 2014”.

They write: “Two Swedes have fallen in love with the rare and elusive snow leopard. Under the attempts to see and photograph it, they also come closer to the culture and the people of western Himalaya.”

We are very happy about this and that the mystical and fascinating snow leopard, as well as its situation, is being highlighted.

The book has received many positive reviews since its release. In a review in the magazine Våra Rovdjur, reviewer Hans Ring writes: “The sad eyes on the front cover portrait of the snow leopard quickly raises the question: How will you fare in the future?” He continues: “Read the book, enjoy the beautiful pictures, take part of all valuable and up to date knowledge that is being passed on.”

With that said, I wish you a merry Christmas!