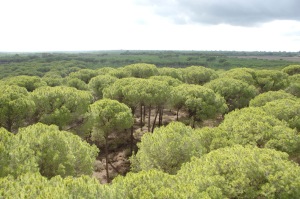 Between 24 to 28 October I went to Doñana National Park in southern Spain to meet Antonio Rivas of the Iberian lynx Ex-situ Conservation Programme El Acebuche and Guillermo Lopez from the Lynx Life project. Both projects are fundamental in saving the Iberian lynx.

Just ten years ago, in 2002, it was estimated that there were only 150 individuals left of the Iberian lynx, which made it the most endangered cat species in the world. These 150 individuals were spread out in two separate populations, one in Sierra Morena and the other in Doñana National Park.

Working intesively with bringing the population up by removing threats such as snares, dangers in traffic and bringing the rabbit population up, the teams also work with genetic reinforcement and reintroduction and by today 17 Iberian lynxes have been reintroduced into the wild from the breeding programme.

One day we climbed up a fire watch tower and got a spectacular view of Doñana Natural Park, which acts as a buffer zone to the national park.

I was not lucky enough to see an Iberian lynx in the wild but the knowledge that they are there is enough.